Are you counting a Brexit windfall, or crying in your cuppa?

Back in June 2016 the UK voted to leave the EU.  At the time, we at Global Investor Group e-mailed you and suggested this was a good thing and that it represented "massive upside potential for investors" with the stomach for a medium term hold on bluechip only stocks.   Especially those in our offshore markets such as NZ and Aus given how the Pound was at it's lowest in years.

The proof's in the pudding

We selected a number of Blue Chip only stocks to populate our first Brexit Strategy (Brexit Bargains) based on a set of parameters that held strong fundamentals.

Some of these fundamentals included companies with, low debt, a long trading history and that operated in traditionally strong UK markets (such as construction or tech).

Within a month of the Brexit vote in 2016, aided by the weakened pound, our investors from outside the UK gained over 11%.

Some sold out, others stayed the course.

It’s been a rocky road since.  Markets have been unsettled and the topic of Brexit became the worlds biggest political football.  The Pound slipped further and consumer confidence slumped.  All of which we feel was predictable. 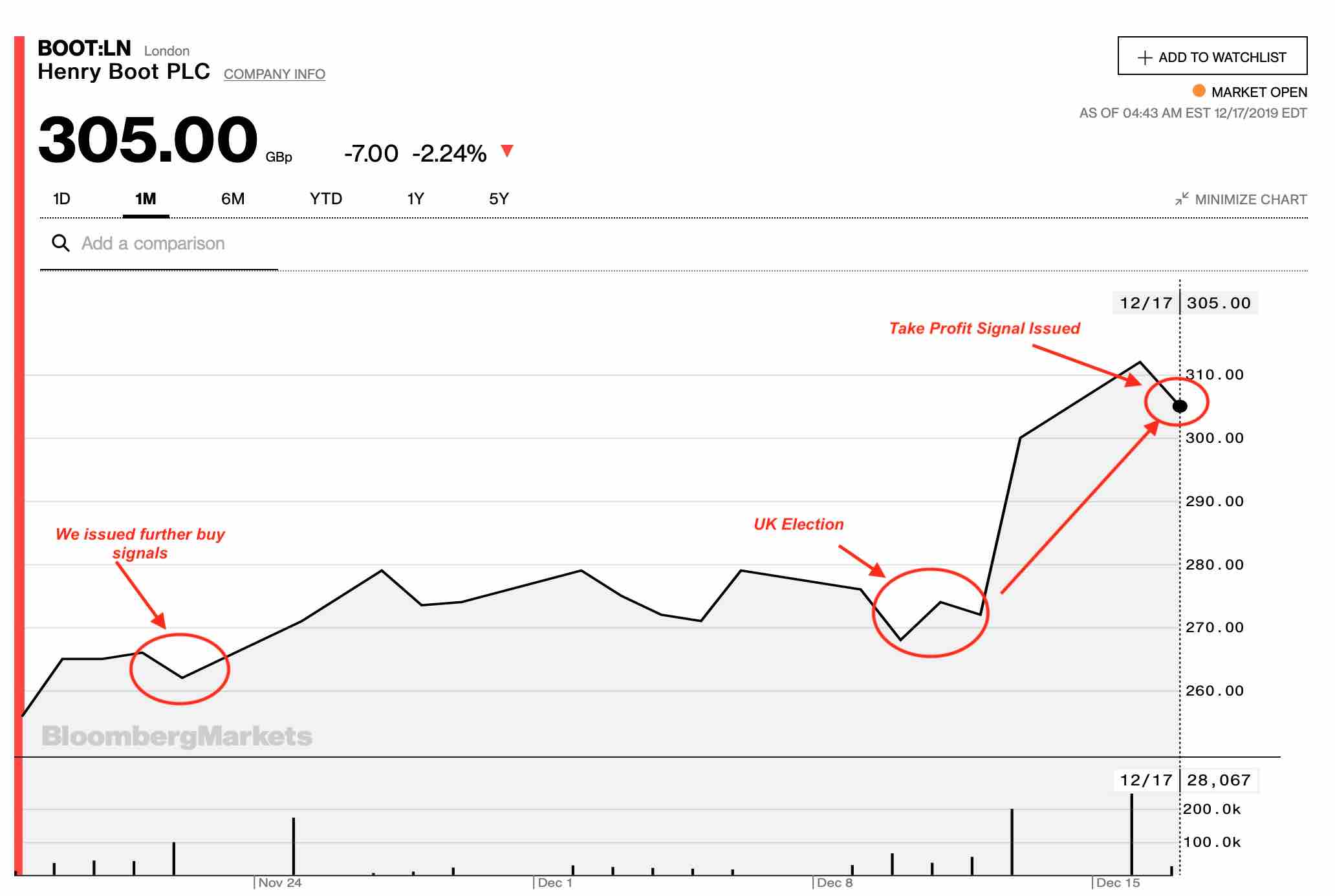 Equally predictable, in our opinion, was that the UK would eventually honour the referendum.

The UK's voted, by way of a massive landslide, to “Get Brexit Done".  The message was very clear.  Get on with it.  The market listened and the rest will be history.

Thankfully, a core group of early adopters remain in the Brexit Bargain strategy to take advantage of the outcome.  And they've seen a massive upside over the full term.

A sample from one of the companies we bought post referendum (Henry Boot) bought at £1.79 on the 5/7/16 is above.  Gains in the past year alone represent a return (as seen below) of 32%.   (Full trading history available on request.)

Admittedly, some investors haven't been so lucky.  Those who jumped ship at points along with way when the journey seemed too rough have missed out.

Some ignored our advice and took a short term loss.  There were certainly up's and downs, but as always, the medium to long term numbers speak for themselves when you stick to the basics.

We believe in solid, underlying fundamentals.  We were, and in fact are, confident that the UK won't sink beneath the waves having left Europe.  Let's not forget that the UK has faced far greater challenges in the past. It's an old country with deep roots in finance.

We feel strongly that as with most things in life, fortune favours the brave and I'm pleased to report that investors still active in the "Brexit Bargains" strategy have seen most markets rocket again this week, followed by a buoyant Pound.

Are there any profits left to take?

Analysts, investors, politicians and pundits now all predict a significant upside to UK investing once again.

Business confidence is going through the roof now the Tories have such a clear mandate to govern for a full term, and money is flooding into the city.

If you did miss out on the gains so far though, it may not be too late to get your share.

We feel there'll be more to come.

As suggested 3 years ago, there'll be immediate strategic gains this month and next, along with a significant medium too long term upside when sticking to the right strategy.

We choose temporarily undervalued Blue Chip FTSE100 stocks with great dividends, so even a buy and hold pays well.  The real benefit though could be the added profits we predict will come as the pound continues to strengthen when Brexit is finally done.

Is there a win left for me?

Yes.  For now.  Buy one of our Blue Chip strategies now and enjoy a great tax free dividend income while you wait to gain capital from currency and price increases.  Again.  Simple but effective.

Timing is everything. Learn how to get involved with Global Investor Group now, before the trough runs dry.

Tax Haven: Your Guide to Forming an Offshore Company

Estonian Property Boom: How to Benefit from a 10% Population Boost Overnight